As soon as the first AX router hit the market, I bought it immediately.

Why would you need such a cutting edge router that doesn’t even have any compatible clients? Well, it actually does have some — a Galaxy S10/S10+ and at least one Intel AX200 adapter. Moreover, any manufacturer, when releasing a cutting edge router, usually implements not only support of the latest standards and the widest functionality, but also the most progressive hardware, maximum memory capacity, more ports, etc.

The router itself is a huge black box. You can position it on any surface or you can hang it on the wall — as you wish. As you can see, I chose the wall mounting option. Antennas have a little bit of ‘gold’ on them to increase throughput, of course.

What we have inside is a 4-core Broadcom BCM49408 chip (Cortex-B53, 1.8 GHz), a BCM53134 controller for wired network and two BCM43684 controllers for wireless connection. The BCM43684, in addition to 802.11ax standard operation, also supports 160 MHz wide channel, MU-MIMO, 1024-QAM, as well as an unreally fast aggregate data transfer rate (up- and downstream) of 4.8 gigabits per second. It also has a 1 GB RAM and 128 MB of NVRAM. There are two USB 3.0 ports that allow you to connect any drives to build your own cloud storage, an SMB or FTP exchange server, or a DLNA server.

For me, the most exciting feature of this router is its data transfer speed, because theoretically the 802.11ax standard allows to set up a DIY wireless NAS — it’s my golden dream, to be honest.

To test the router, I’ve got a couple of the fastest Wi-Fi adapters the market has to offer.

One of them is an ASUS USB-AC68 (5GHz, 802.11ac) with those rabbit ‘ears’, which is said to provide data transfer speed up to 1,300 megabits. It is probably the fastest Wi-Fi adapter with USB connection available today.

The other one is a monstrous ASUS PCE-AC88 with four antennas. This one is a legendary beast, because since 2016, nothing more powerful didn’t come up. It delivers up to 2167 megabits per second at 5 GHz and 802.11ac.

And the third one is a newbie on AX standard Intel AX200. It looks like an M.2 card installed into the PCI-E slot via adapter. As you can see, it has only 2 antennas and no radiators at all. The manufacturer promises up to 2.4 gigabits per second (in theory).

As far as I can tell, the upcoming PCE-AX55BT by ASUS is exactly the same, only with an external antenna base and a fashionable black radiator.

By the way, that AX200 is the cheapest one among the above-mentioned models: it’s three times cheaper than PCE-AC88 and twice as cheap as USB-AC68.

But now let’s talk a little bit about the router firmware interface in general — in view of the Asuswrt-Merlin, of course, and I’ll be focusing on the 384.13 version.

The main screen is pretty standard for ASUS routers (after all, why spoil what proved to be excellent?). Note the monitoring of the 4 CPU cores load area on the right.

Wireless client connection via 802.11ax is immediately displayed on the ‘System Log’ → ‘Wireless Log’ page. Look at the screenshot below: there are 3 AX devices connected, two Galaxy S10 and one desktop PC (via Intel AX200, btw).

On the client side, the Windows 10 gives some incredible figures — those same 2.4 gigabits per second. Wow.

It’s now time to get back to the speed of data transfer to and from USB drive through the air. I’ve used my 1 TB Toshiba TR150 SSD for testing. It’s a drive I use to store everything. It’s a dumpster among my storage devices. The drive is connected via external AGESTAR 3UB2A8S-6G USB 3.0 rack. Here’s what we have in terms of clean read and write speeds when a rack with this drive is connected to a PC:

Now let’s enable an SMB storage on the router and try our USB-AC68:

Could it be faster? Maybe the problem sits in my SMB and I should try FTP instead?

And the downloading speed rose up to the sky!.. It seems to be. But no, it’s just Filezilla displaying speed in mebibytes per second.

What can I say? First of all, the read speed is most stable with the AX200 adapter. Second, the AC88 surprisingly did worst — even with an external antenna base. Third, the write speed is always less stable than the read speed. Fourth, the read/write speed does not seem to depend on the channel width, but on the USB controller of the router itself or the CPU.

I’ve also tried to connect a flash drive to the router (a SunDisk Extreme PRO USB 3.1 256 GB SSD drive, in fact), but the result has not changed at all, although this flash drive is able to write and read at 400 megabytes per second.

What if the router’s CPU is too weak? It’s actually very likely, since the load graph at copying from router to PC over Wi-Fi looks like this:

However, Wi-Fi is still far behind any wired connection:

For more clarity, here’s a nice chart for you:

And finally, I’d love to talk about my personal impressions after a month of use:

In other words, there is literally everything you may need in terms of software features, and there is nothing to complain about.

That being said, this router may be needed in three cases:

Well, the ASUS RT-AX88U router is just a device I strongly recommend. 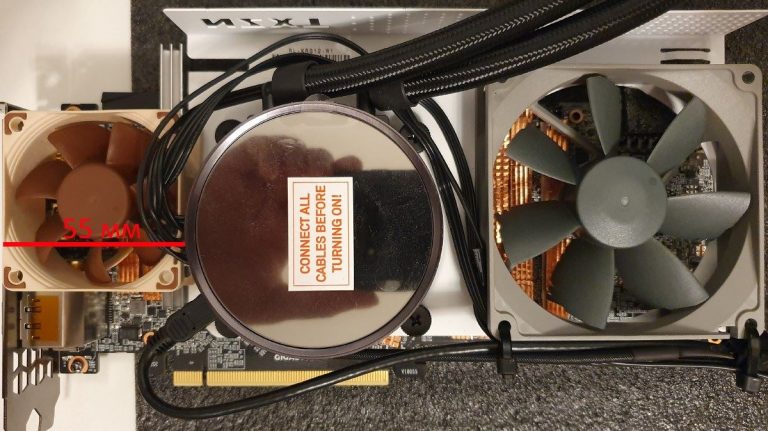 How to install a liquid cooling system successfully (from the first try!) on your 2080 ti. In this example we will take the Kraken X42 + Kraken G12, because this set-up seems to be optimal for the cooling efficiency vs. noise factor.