In my pursuit of a perfect pair of headphones, I laid my hands on the next wireless Bluetooth model, which is the Shure Aonic 50.

On the Shure website, there’s a hint about the Aonic 50 having to deliver a smooth sound, because ‘some comfortable, high-quality headphones with studio-class sound are the least we could do for you’. And since I’m a big fan of neutral sound delivery, my audiophile libido immediately kicked in.

After all, ‘studio-class’ should be neutral, right?

The assembly quality and the materials are above average. The headband and the removable earpads want you to believe they’re made of genuine leather. The cup mounts are made of brushed aluminum. When moving apart, they get fixed at discrete positions. There are even notches marking the positions, can you believe it? Thank you, Shure.

The solid cast plastic cups have a matte finishing, and you can easily wipe them with a cloth. The earcups rotation mechanism is designed around two axes. The headband sports a very soft lining. The earpads are quite comfortable, too. This being said, the fit is just perfect. Even though the ear doesn’t fit completely inside the earpiece and is slightly pressed against your head – still perfect. In general, the headphones are comfortable on your head right away, without adjusting or getting used to the fit, they don’t clench your head and don’t fall, so the pressure is just right. These guys weigh 334 grams.

The case included deserves a separate point. It’s not a headphone case, it’s a freaking hatbox. The case is HUGE and just ridiculous in terms of usability. Here’s how it looks like compared to the WH–1000xm4 and IO–6 cases, although the photo doesn’t convey its real monstrosity.

At the same time, the Aonic 50 easily fit into the IO–6 case, which is one third smaller.

Speaking of the controls, the Aonic 50 are quite traditional: no touch buttons, and everything you have are push buttons and a slider. At the bottom, there’s an ON/pairing mode button, and a little higher we have a volume and playback control. And further above – a 3-position slider to enable or disable active noise reduction, as well as activate the acoustic transparency mode. All the controls, as well as the Type–C port, are located on the right earpiece, and the left one only has an analog cable input.

In terms of ergonomics, I only doubt that slider: it’s pretty difficult to switch it to the middle position (active noise reduction off) from the first try. As for the buttons, though, you’ll be able to push them without looking in a day or two.

The Aonic 50 connect to the source in three ways:

That is, the headphones can be used in passive mode only, even with the drained battery. All cables are included.

The main disappointment is their parametric equalizer.

Look, everything is extremely serious here: Low shelf and High shelf on the sides, and the two Bell-type points in the middle. You can adjust the Q factor and the bandwidth, isn’t that awesome? Or even turn the Bypass on and off for a quick equalizer to sound influence check.

And now… Just grab your whatever you’re sitting on here: THE EQUALIZER ONLY WORKS IN THE PROPRIETARY SHURE PLAYER. That is, only for playing files from the phone’s memory. It doesn’t affect the external apps sound at all – forget about your Youtubes, Spotifies and SoundClouds, it’s not going to get any better.

Shure, why? I mean, the idea is great and all, but why is it so oddly implemented? Just admit your case designer sneaked into the technology department once, and you decided to pretend it’s okay.

Moving on to the sound. We were promised some ‘high-quality studio-class sound based on the extensive professional expertise’, but many reviewers describe the Aonic 50 as the most neutral wireless headphones.

I wouldn’t be able to tell what the Shure themselves mean by ‘studio-class sound’, or what the reviewers use to test these headphones, but the Aonic 50 sound far-far-far from neutral. The headphones have an absolutely clear, very neatly implemented V-shaped delivery complemented by a saturated upper-frequencies range.

And it’s quite a miracle, but the Aonic 50 sound very… convincing, believe it or not. When you turn them on for the first time, you immediately realize that yes, the frequency response is curvy, but not because the creators goofed up the tuning, but because that’s exactly what they wanted us to hear.

The upper frequencies. These are absolutely stunning for a wireless model, just uncompromising in quality and highlighted in quantity. The headphones don’t ring, don’t creak, don’t get sandy, don’t slip into any metallic traces at all, they just deliver a handful of some very neat uppers. The overhangs, the sense of space, the sound stages are here, and it’s awesome. The upper-frequencies range is good not just for some wireless headphones for around $250, but also for any closed-back model worth up to $650 or even more, I’d say.

The middle frequencies. There’s a dip at 4 kHz, which makes all the voices and the related instruments sound as if from a distance. But there are no sibilants, and that’s not bad. Well, the dip at 200-1000 Hz with the subsequent rise are responsible for a certain disembodied, subtle sounding. In some tracks, it feels like a preferential decision, in others it almost bothers and doesn’t let you just listen to the music the artist wanted you to given the smoother sound delivery.

The bass. Everything is quite simple here – there’s a peak at 125 Hz making the whole of the musical material more weighty and pressing. The sub-bass just almost exactly reaches the 20 Hz mark.

The overall impression of the sound of the Aonic 50 is great, these are very detailed headphones having their own fine-tuned delivery, a mind-blowing upper-frequencies, a good lower-frequencies and an okayish middle range. They convey the space and volume of the imaginary sound stage and its depth just perfectly, don’t mess with the instruments positioning, and can be used when playing competitive games.

The Aonic 50 compared to the IO-6 and the WH-1000xm4, all with noise reduction enabled:

Look at the area below the 1000 Hz mark: Even for the relatively smooth IO-6 sound delivery, the entire graph is higher than the Aonic 50 one, because the IO-6 have a normal middle range and a slight emphasis on sub-bass.

Why is this important? Because when you pull on your Aonic 50 and go out on the street, or even worse – go down to the subway, all the magic of the sound just fades away in a heartbeat: the middle- and the lower-frequencies ranges get choked by the ambient noises, and all you’ve got in your ears is just a unaccompanied technical ringing. And nothing else. The middle and the bottom range just disappear. And a cherry on top: the volume band is pretty short over the wireless connection, but the upper frequencies grate on your ears at some 80% already.

If only… If only the equalizer could adjust the sound regardless of the application, if only the active noise reduction worked, I’d call the Aonic 50 perfect wireless headphones, or even unique given the $250 price tag. I’d even forgive the Shure for their fat case blunder.

Yeah, if only it was true.

Whatever the Shure wanted to create, they’ve produced some sort of wireless headphones for home usage, which you won’t carry in their case, since the case is disgusting and why the hell would you use it at home? For a long trip from your sofa to the bathroom? Obviously, yes, because there’s no way you would use the headphones when out on the streets. Unless you’re a fan of boring ringing. The only use case to imagine for the Aonic 50 is listening to them when at home or in your quiet office, but I just don’t believe someone would ever buy a pair of wireless headphones for such things. Audiophile life is a challenging thing. 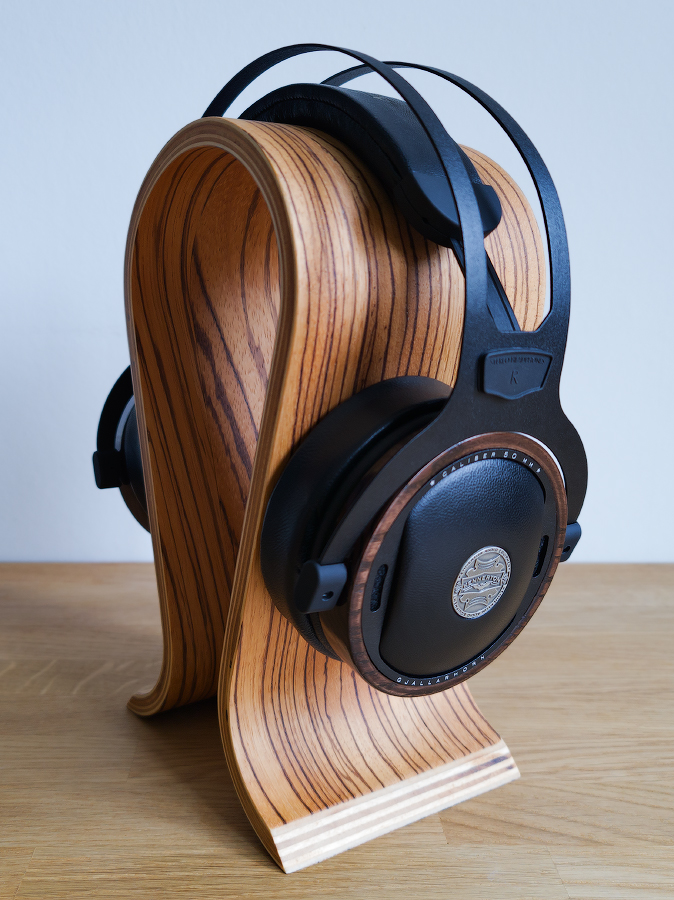 The plague is spreading across the planet, and we’re safe and sound at home. Going out to cinema, concerts, exhibitions isn’t what matters anymore and is even quite unsafe for health. It’s all about ourselves that matters now and its importance only increases. Therefore, today I’m going to review one of the rare types of… 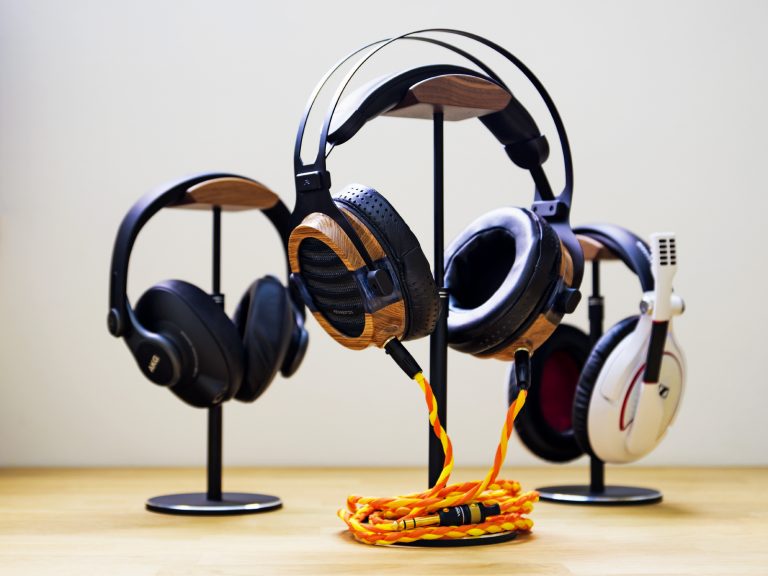 Let’s talk about what the perfect headphones stand should be and what’s the proper position for your headphones on such stand. 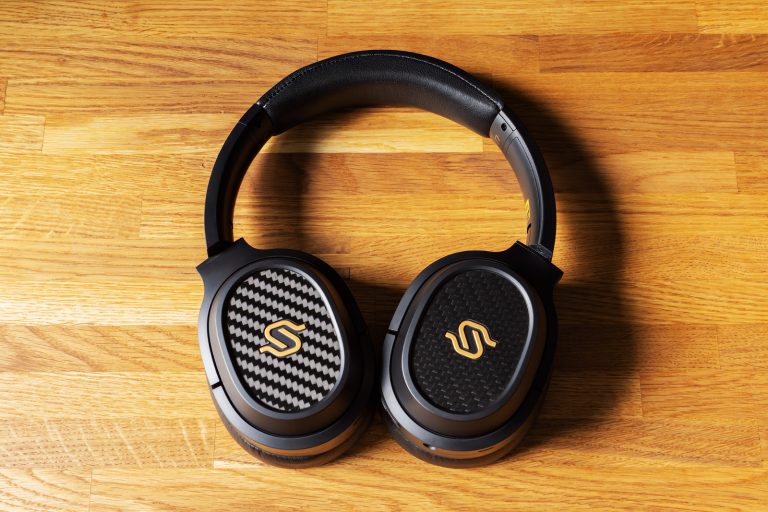 Here are the headphones that I, again, was really waiting for. These are the Edifier wireless planar ones powered by Audeze technologies. And the symbolic STAX in the model name kind of suggests THINGS. Well, since closed-back planars with decent sound are something manufacturers don’t always achieve, it was double as interesting for me to take a look at this Edifier masterpiece.